India’s fast changing economy and population has thrown many challenges in front of the policy makers and implementers. It has become imperative for them to develop and implement technologies, which would keep India abreast with the modern innovations and developments. The biggest challenge today is ensuring the safety of the ever-changing population and environment. The major cause of worry now is the dangers that these developments bring along with them. The deteriorating environmental conditions, frequent industrial, commercial and general accidents due to fire are cause for major concerns. Today, when we talk about urban population, we immediately think of people living in high-rise apartments, large multiplexes, and shopping malls. These are all places of high population concentration and always prone to accidents which could cause high casualties. Even in commercial establishments, the usage of electronic gadgetry has increased many folds thereby making it necessary to ensure that even in severe conditions these gadgets keep functioning.

Majority of accidents, be it industrial, commercial or residential occur due to fire and 80 % of fire accidents are caused due to electrical short circuits. The major casualties in case of Electrical fire occur due to suffocation caused from inhaling excessive smoke, accidental injuries caused due to non-visibility arising out of dense black fumes emitted from burning insulation of the wires and cables and after injuries, diseases and disorders caused due to the harmful affects of the inhaled toxic gases emitted from the burning wires.

The advent of Flame Retardant and Flame Retardant Low Smoke PVC has decreased the inherent properties of Halogen and Smoke Generation in case of fire, however it this development has not altogether eradicated these properties. The burning PVC still generates toxic gases and dense black fumes, but it is limited to a certain degree and percentage. Plainly speaking it is still as dangerous as it was before.

These negative features of PVC are not only harmful for humans but also, have a very bad affect on the environment. The wish for a safer alternative spurred the researchers around the globe. After years of pain staking research and development, the researchers came up with an alternative, which is 100 % more safe for humans, environment and the electrical system too. This new alternative is Zero Halogen Flame Retardant (ZHFR) compound.

Zero Halogen Flame Retardant (ZHFR) Wires and Cables have found widespread acceptance all over the world. ZHFR Wires and Cables are ideal for high population density areas, such as Shopping Malls, Multiplexes and Cinema Halls, Hotels, High Rise Apartments, Railway Stations, Airports, Schools and even in Rail Coaches. ZHFR Wires and Cables are also used where sophisticated equipments and electronic gadgetry is being used such as in Defense Installations, Ships, Metro Railway, Petrochemical Plants and Financial Establishments where loss of electronic data could lead to a huge financial loss to lots of people.

The main reasons for such high acceptance of ZHFR Wires and Cables are:

Keeping in view the need for protecting our environment the European Union has issued a new directive for Plastic Material for insulation purpose, which prohibits the use of Halogenated Flame Retardants and six other toxic heavy substances like Lead, Cadmium, Mercury, Hexavalent Chromium, Polybrominated Biphenyl (PBB) and Polybrominated Diphenyl Ether (PBDE). These form integral part of General Purpose, FR and FRLS PVC Compounds.

Finally, given below is a brief tabulation of comparison between the three categories of insulation materials now in use in Wires and Cables:

Relemac Cables true to its promise of always providing you with a safe product of the highest quality has developed Relemac  ZHFR Wires and Cables in its new state-of-the-art manufacturing facility at Kundli, Sonepat. Manufactured on imported machines, after undergoing stringent Quality Control checks right from the raw material, through process and then on finished product. Relemac ZHFR Wires and Cables are manufactured in accordance with various National and International Standards and have been tested and approved by several third party agencies after independent testing at their own laboratories. 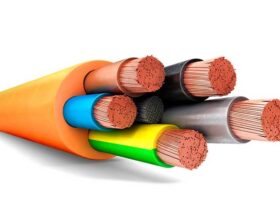